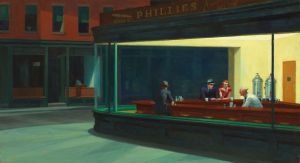 Using the above scene as inspiration, I’ve made my first attempts at the Daily Post writing challenge. This story fills the October 28th Prompt: Find a Muse in the Masters

It was the waiting that always got to him. The missions weren’t pleasant but He could handle them. He just couldn’t deal with the anticipation of the lead up to the task. The suspense of not knowing who the target was until the very last minute, when their eyes locked and He could see the abject fear register in the victims eyes – their sudden realisation that He was here to collect them.

He has been known by many names throughout the ages: Thanatos, San La Muerte, Mors, Azrael, Gan Ceann, and the Grim Reaper. He has been revered, feared, welcomed and shunned. But in the end when He calls, they must come.

And now, on this dark evening in the year that mortals call 1942, He is sitting alone at the counter of a diner. The shop is nearly empty save for the soda jerk, and a couple who’ve come in for a late night coffee after their movie date. He pretends to read the Evening Standard that is spread before him; but keeps half an eye on the patrons trying to figure out who it is He has been sent to collect. It’s a little game He has always played but never won – trying to figure out for whom the death bell tolls before the victim recognises him.

He gives the soda jerk the once over. The man is in his thirties, fit and nimble and surprisingly alert given the time of night and the long hours he’s spent at the service of his customers. The red head is looking a little tired; every bit of her 40-something years showing on her haggard face. Her companion fares little better, coughing heavily around the cigarette dangling from his mouth.

None of them have given him the time of day, except 20 minutes ago when the soda jerk pushed a cup of coffee across the counter towards him. The couple are engaged in hushed conversation; the frown on the woman’s face suggesting she’s displeased with something her partner has whispered. Meanwhile; the woman’s companion is fiddling uncomfortably with his tie, worrying the knot with one hand while he takes a long drag from the cigarette held in the other.

He watches in fascination as the man’s eyes rake over him momentarily, sliding away quickly and then fixing back on him. He waits a heartbeat, two even, as the understanding floods the man’s features. This is it, this is the moment He has been waiting for. He slowly stands, eyes fixed on the man’s in a not entirely unsympathetic manner. He is preparing to take the man home.

6 thoughts on “Taking Them Home – a Daily Post Challenge Prompt”

I am on a long and personal journey learning to live with Bipolar Disorder. I struggle sometimes, but so far I've kept on getting back up when I fall.